Kataragama is a fast developing township in the deep south of Sri Lanka. But in ancient days it was only a small village. It is situated 228km south of Colombo, the capital of Sri Lanka. It is one of the 16 principal places of Buddhist Pilgrimage to be visited. According to the great chronicle of Sri Lankan history (Mahawamsa), when the Bo-sapling (Bodhi tree under which Gotama Buddha attained enlightenment in Buddha Gaya in North India 2500 years ago) was brought to Anuradhapura from India 2300 years ago, the warriors ( Kshatriyas ) from Kataragama were present on the occasion to pay homage and respect.

Kataragama is famous for the Hindu Shrine (Devale) and Dageba (Buddhist Pagoda - Kirivehera). Lord Buddha and his third and the last visit to Sri Lanka were believed to have met the King Mahasena who ruled over the Kataragama area in B.C.580. Thus the Sri Lankans believe that Kataragama was sanctified by Lord Buddha.

The Kirivehera Dageba which stands in close proximity to the Devale was built by the King Mahasena. According to the legend, the King met the Lord Buddha and listen to the Buddha’s discourse and as a token of gratitude, the Dageba was built on that exact spot where it now stands.

Kataragama God is indigenous and long-celebrated in Sri Lankan lore and legend, and originally resides on the top of mountain called Waedahiti Kanda just outside of the Kataragama town. Since ancient times an inseparable connection between the God and his domain has existed. God Kataragama is popularly known among the Hindus as God Skandha, and Sivaites of South India call the God Subramanya. Following are the other names to identify the same God in the Hindu texts; Kandasamy, Kadiradeva, Kadiravel, Kartikeya, Tarakajith etc.

The God Kataragama’s image is depicted either with six heads and 12 hands, or one head and 4 hands. The God’s vehicle is the peacock, which is native to Sri Lanka and India.

In spite of the differences of caste and creed, all Sri Lankans show great reverence to God Kataragama. They honour him as a very powerful deity and beg divine help to overcome their personal problems or for success in business enterprises etc., with the fervent hope that their requests would be granted. They believe that God Kataragama actually exists and is vested with extraordinary power to assist those who ever appeal to him with faith and devotion in times of their distress or calamity.

Kataragama is a multi-religious sacred city as it contains an Islamic Mosque within its Devale complex as well. It holds its annual festival, that celebrates the God’s courtship and marriage to a Vedda princess, in July to August. 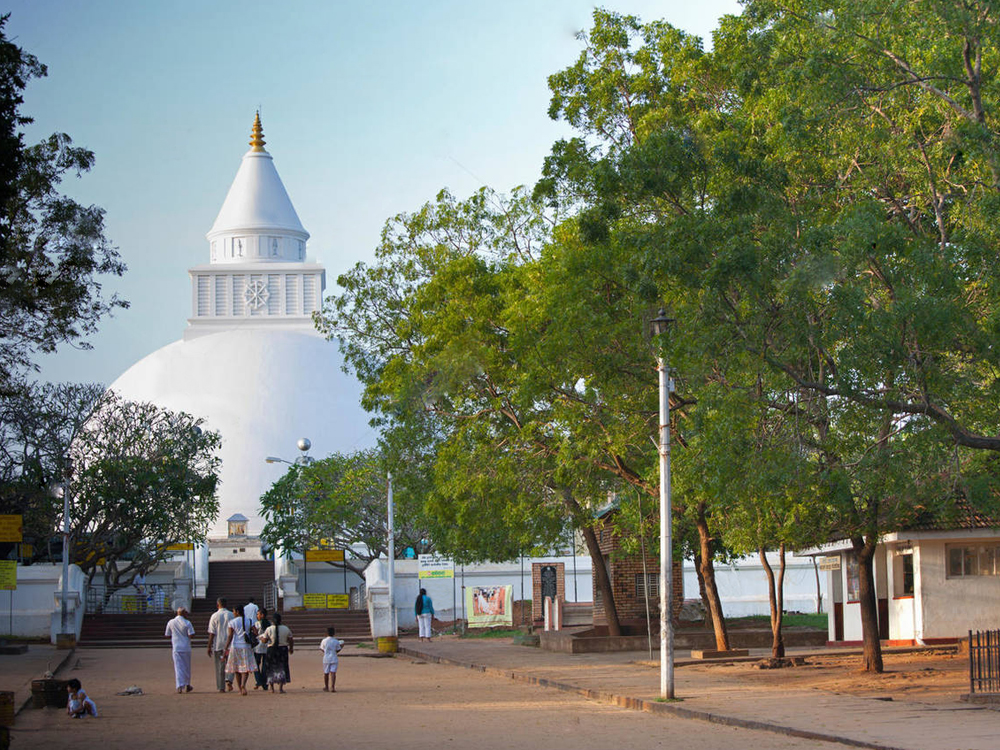 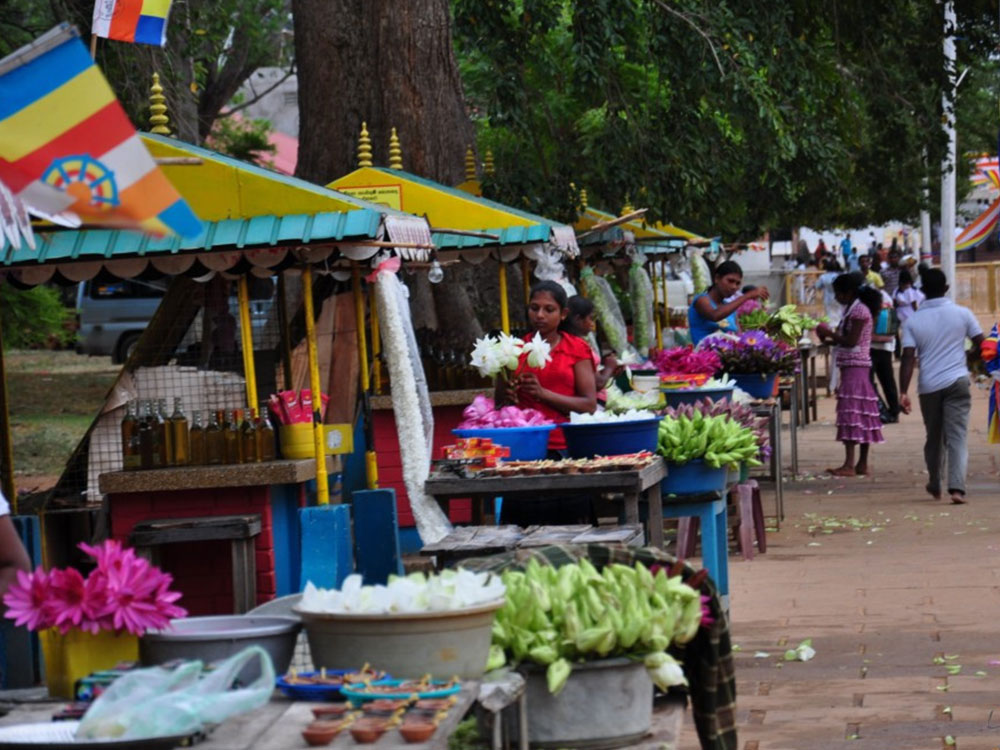 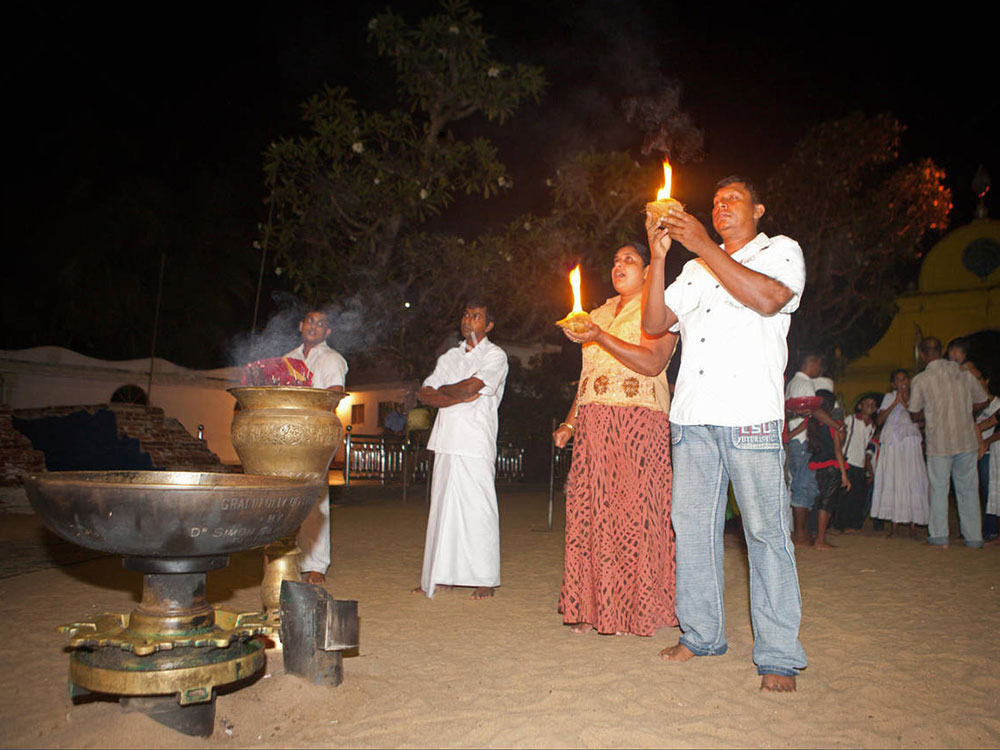 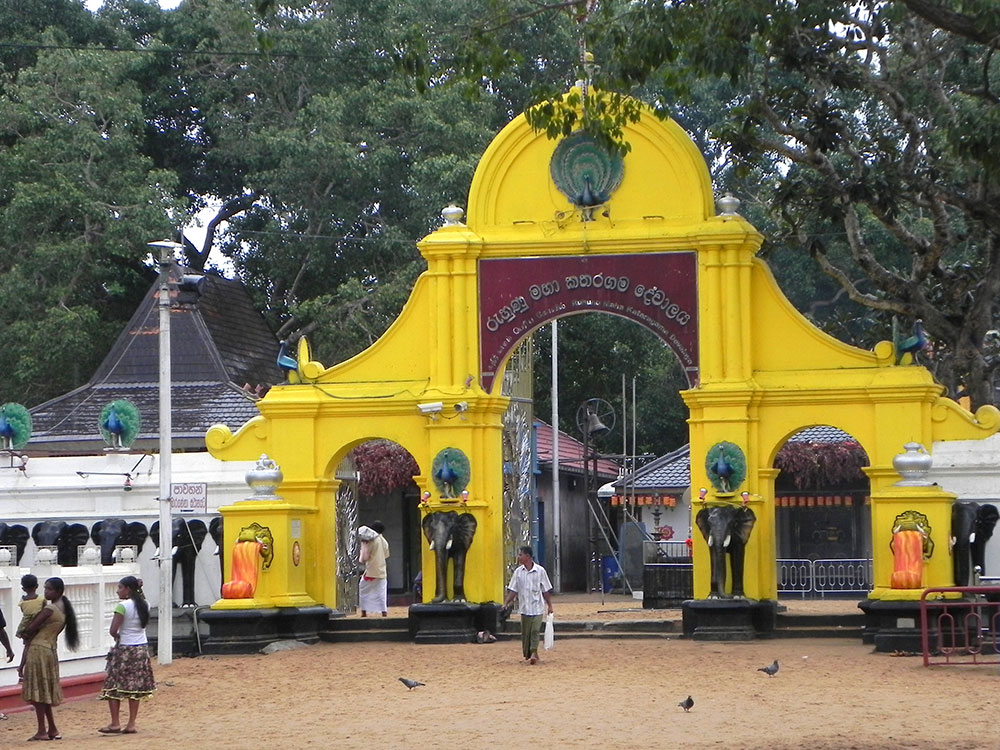 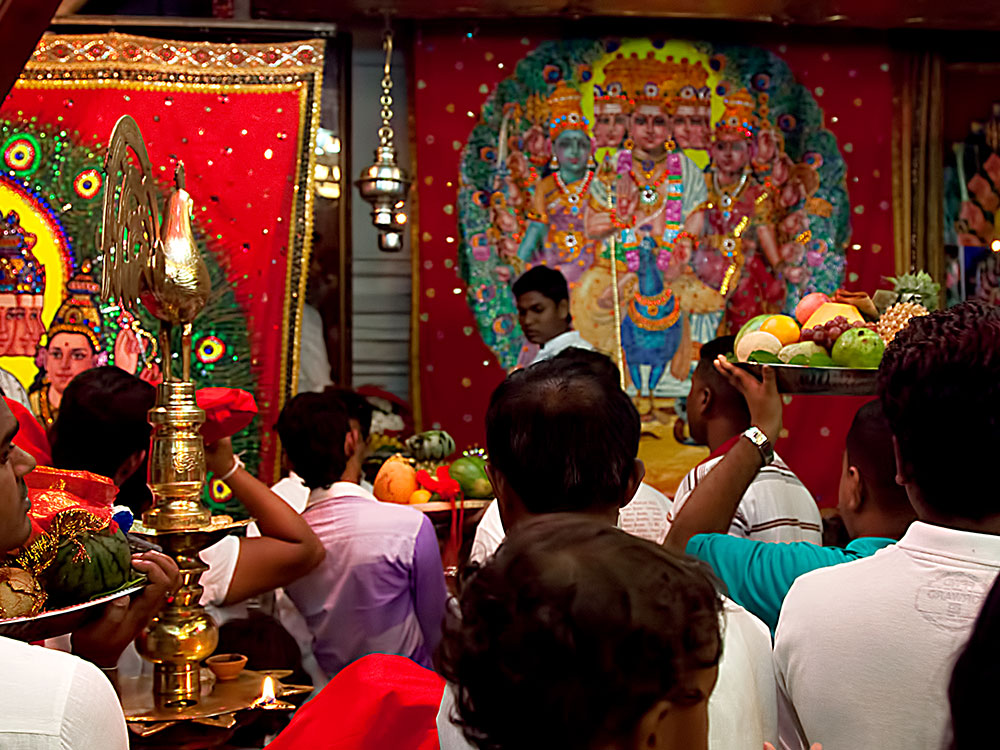 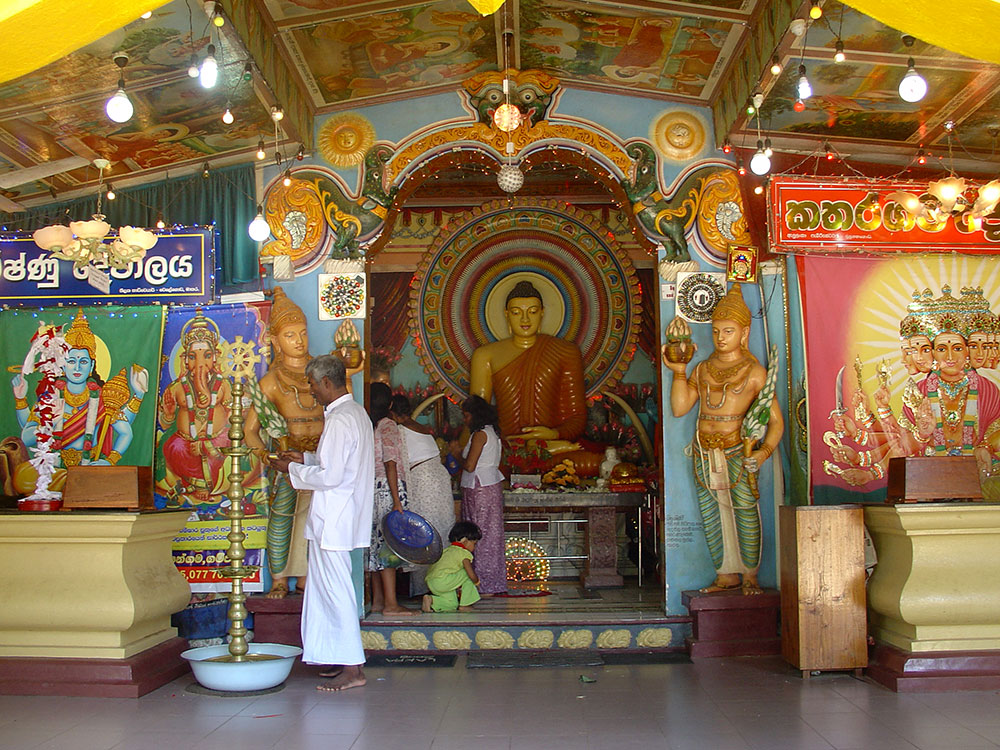 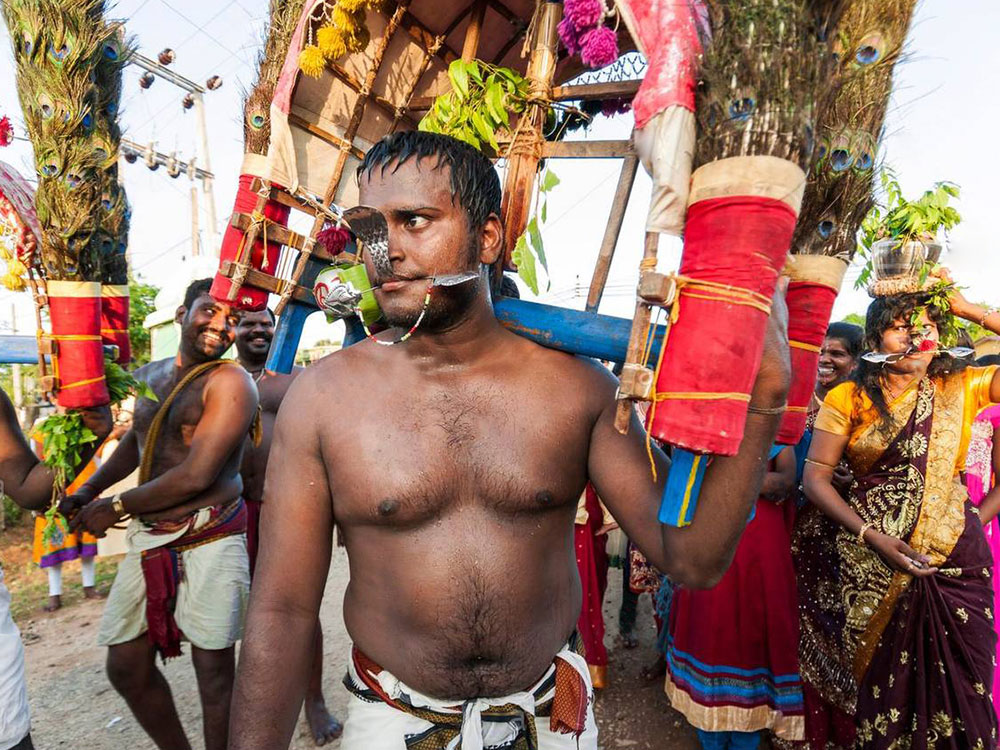 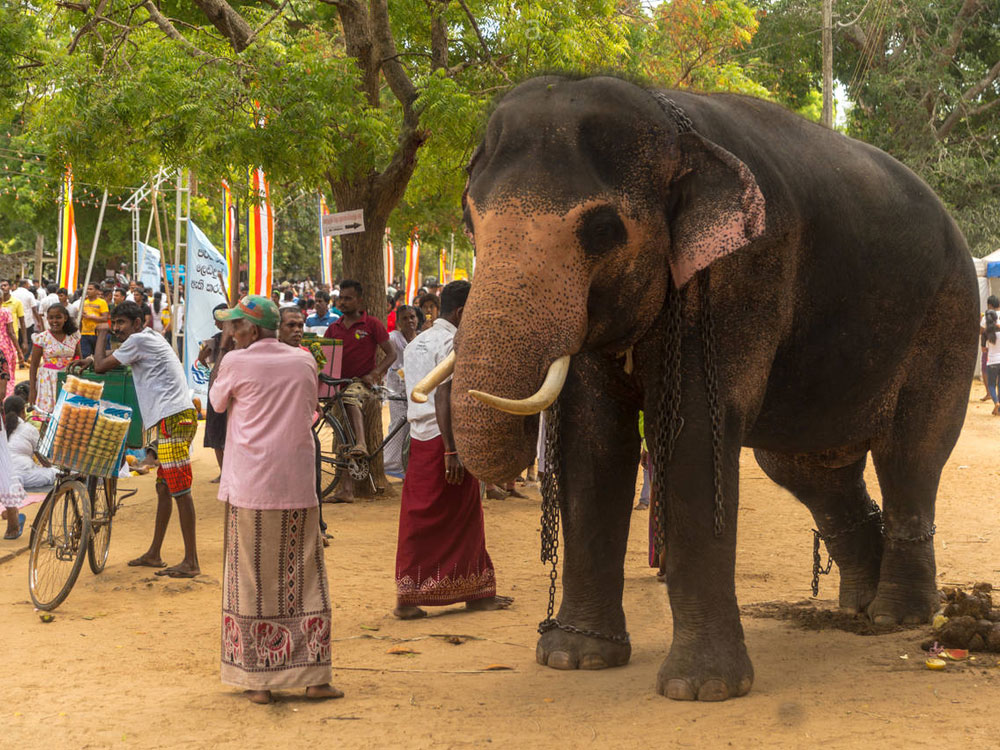